Since 2015, the Shasta Dam raising project has been stalled – it cannot meet basic fiscal requirements set in place long ago to protect taxpayers from costly, ill-advised boondoggles. This project, at a cost of at least $1.4 billion, would expand the reservoir’s capacity by at most just 7% (representing only 0.2% of the state’s total capacity, and with no benefit most years, when the existing lake doesn’t even fill). It would clearly be a massive waste of tax dollars.

However, that didn’t seem to matter once the current anti-environment federal administration came to power. In early 2018, Congress agreed to spend $20 million for “design and pre-construction” work on the dam. And on November 30, 2018, the Westlands Water District released a Notice of Preparation for a draft EIR under the California Environmental Quality Act.

On December 12, Westlands held an open house in Redding, meeting with nearly universal opposition to its plans, which are illegal under state law protecting the McCloud River, and threaten tribal lands and endangered salamander species. The State of California has opposed the project, which only benefits Westlands’ farmers in southern California.

Comments are due January 14, 2019. We will soon provide additional information about important issues to raise in your comments.

Completed in 1945, the 602-foot Shasta Dam is the ninth-tallest dam in the US, holding 4.5 million acre-feet of water when filled to its maximum depth of 1067 feet. The story of dam construction, first proposed in 1919, is a long one – this Wikipedia page is a good place to start. Shasta Dam stores water from the Sacramento, Pit and McCloud rivers and other local sources – including the threatened Medicine Lake Aquifer – for electricity, flood control, agriculture and domestic use by millions of people.

However, its construction came at a great cost – financially, environmentally and culturally. Despite mitigation measures, the dam significantly blocked salmon migrations upstream, and flooded over 90 percent of the Winnemem Wintu tribe’s traditional lands. 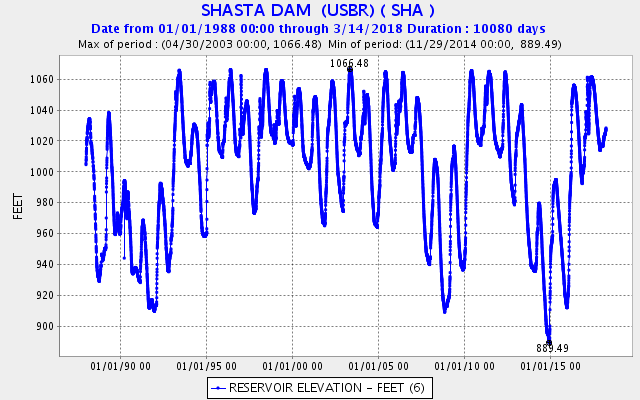 Despite these drought conditions, the federal Bureau of Reclamation continues to move forward with plans to raise the dam, supported by powerful forces such as the Westlands Water District, which in 2007 spent $35 million to purchase affected local land in anticipation of this construction.

On July 29, 2015, the federal Bureau of Reclamation released two voluminous documents – its Final Feasibility Report, and Final Environmental Impact Statement and Appendices (which you can access here). The “Preferred Alternative” is an 18.5 foot dam raise which would add 634,000 acre-feet (a 7% increase) in storage capacity.

“Based on the evaluation of the potential physical accomplishments and the benefits and costs of the alternative plans, CP4A is…identified as the Preferred Alternative…CP4A is anticipated to provide benefits under a wide range of future climate scenarios and to provide additional flexibility to adapt to potential changes in hydrology under climate change. However, we are unable to make a final recommendation due to unresolved considerations as discussed in Chapter 9. Specifically, an agreement with project participants must be negotiated that addresses an up-front cost- share consistent with the beneficiary pays principle. There are also potential conflicts with State law, fish and wildlife concerns, and tribal considerations that must also be addressed.”

The “unresolved considerations” mentioned start with funding – for the estimated $1.265 billion and the $59 million increase in annual costs associated with the preferred alternative.

“…the traditional model under Federal reclamation law, with Congress providing funding from annual appropriations to cover all the costs of construction over a relatively short period of time, and a portion of those funds being repaid to the Treasury over 40 – 50 years, is unrealistic for the identified SLWRI NED Plan.”

Additionally, the State of California will not contribute to this project because its laws protecting the McCloud River prohibit it. The report also notes that significant environmental and endangered species issues also remain unresolved.

The proposal to raise the Shasta Dam takes place in the context of drought, and political maneuvering by both parties on the state and federal level. We will continue to highlight developments on this issue as they take place (see sidebar for relevant news and information).