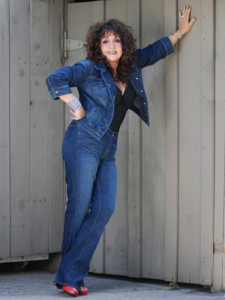 McCloud’s clean air, an amazing Cajun Jambalaya dinner and a special performance by the legendary Maria Muldaur and her Bluesiana Band are in store this Sunday, September 10! This event benefits the Mount Shasta Bioregional Ecology Center, a local grassroots nonprofit.

*JUST ADDED* – a side of Blue Relish. These local favorites will now provide dinner music for our VIP guests!

Advance VIP Cajun Jambalya dinner reservations and general admission tickets for Maria Muldaur are now on sale online on this page, above and in person at Directions (312 N. Mt. Shasta Blvd., Mt. Shasta). Discounted pre-sale tickets for the bluegrass festival are also available separately on the McCloud Chamber of Commerce website.

On Sunday, bluegrass festival music ends at 4 pm. After that, a short walk away, the Maria Muldaur benefit schedule is as follows:

Maria Muldaur is a Grammy nominated American folk, roots and blues singer. Beginning her career as a member of the Even Dozen Jug Band (also featuring John Sebastian and David Grisman), Muldaur was a staple in the Greenwich Village folk revival of the early 1960’s.

In 1973, her first solo album included the mega hit “Midnight at the Oasis” which charted at #6 on the Billboard Hot 100 charts, and is one of the most memorable songs of the 1970’s.

Muldaur has since released over forty albums exploring a range of American Roots Music, including blues, jazz, R&B, gospel, big band and others as well as releasing several award winning children’s albums, that combined have been granted six Grammy nominations and several Blues Music Award nominations.

In the process, Maria has collaborated with everyone from Taj Mahal, Bonnie Raitt, Dr. John, Stevie Wonder, Hoagy Carmichael, The Grateful Dead and countless others.

We are a community of people inspired to preserve, protect and restore our world-renowned mountain environment.

We recognize the Mount Shasta area as a special place.  Collaborating with like-minded groups within and beyond our area, we support the best science-based practices for managing resources. We tell the compelling natural and cultural story of our mountain, as we invite and activate people to appreciate and explore it.

The 5th annual McCloud Mountain Bluegrass is a McCloud Chamber of Commerce event and is made possible by a hard-working group of volunteers and the generous support of community businesses and individuals.

This year’s event will benefit Young Imaginations, a non-profit partner of the McCloud Chamber of Commerce working to expand music education programs at the McCloud Elementary and High School.  Tickets are available here, or you can email info@mccloudchamber.com for more information.