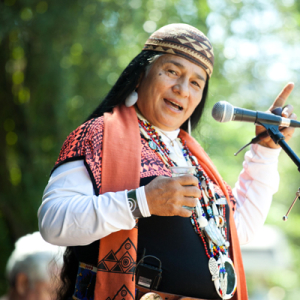 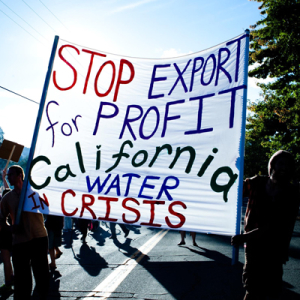 “If the state of California is serious about addressing climate change and recovering from this mega-drought, it should severely limit extractive, fossil fuel intensive uses of water, especially at the source”
– Angelina Cook, Stewardship Coordinator, Mount Shasta Bioregional Ecology Center.

A growing coalition of concerned citizens and conservation organizations convened at the headwaters at Mount Shasta City Park on Saturday, September 26th to protect California’s source waters from the water bottling industry and other threats. The event was organized by Vicki Gold of Water Flows Free and co-sponsored by the Environmental Justice Coalition for Water and the Mount Shasta Bioregional Ecology Center.

Tribal leaders, environmentalists, artists and activists rallied against Crystal Geyser’s pending beverage manufacturing plant and Calpine’s proposed industrial geothermal plant in the Medicine Lake Highlands. Both developments threaten water quantity and quality in the area and have been the target of Northern California Indigenous tribal and grassroots campaigns.

The keynote speaker, Chief Sisk, explained how the Winnemem Wintu are a traditional California Indian Tribe who still inhabit their ancestral territory from Mount Shasta down the McCloud River watershed. She was quoted on advertisements for the event: “People can live without oil, they can live without gold, but nothing can live without water.” During the event Chief Sisk explained how water industries degrade water quality and fish habitat and disrespect indigenous relationships to their sacred springs.

From the source headwaters of the Sacramento River, waters flowing from Mount Shasta and Medicine Lake Highlands are a strategic source of California’s freshwater. The region’s source water flows into Shasta Lake, California’s largest reservoir, which supplies 40 per cent of the Central Valley Project’s water and flows downstream to the State Water Project.

Over the past two decades, water bottling has been seen as a potential solution to fill the economic void left from the decline of the region’s once-booming timber industry. “The problem,” says Cook, “is that when harvested sustainably, trees grow back, but when water is extracted and exported from the watershed, it’s gone… until the rain and snow return. We don’t have control over that.”

Chief Sisk led a group of more than 150 citizens on a march to the Crystal Geyser plant, located less than a mile uphill from the Upper Sacramento River Big Springs. Once the protest march arrived at the plant, Sisk made an appeal to Otsuka Pharmaceuticals, Crystal Geyser’s parent corporation located in Japan, asking the company to reconsider their plans and stop industrial beverage development expansion in the region.